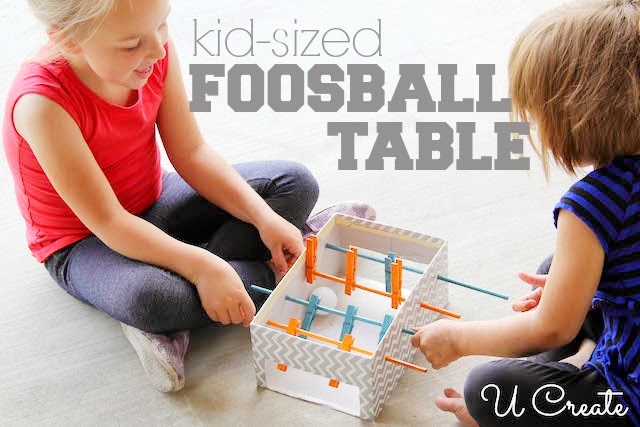 My husband and I, along with our 11 year old son, love to play foosball.  We will play until our hands hurt.  My little girls want to play so bad, so we let them drop the ball on the table.  That only satisfies them for a little while.  They REALLY want to play.  So we appease their desires by getting 10 gallon paint buckets for them to stand on.  They start to play, but then they can’t reach all the sticks because the paint buckets don’t move so they are stuck having to play stationary and only being able to reach two sticks.  Yes, this is as comical as it sounds!  You see why I had to come up with a better solution.
This is when an idea for a DIY kid-sized foosball table came into my brain.  Then I began to think portable and mini sized.  The lightbulb clicked on in my brain and the girls and I created their very own mini foosball box! 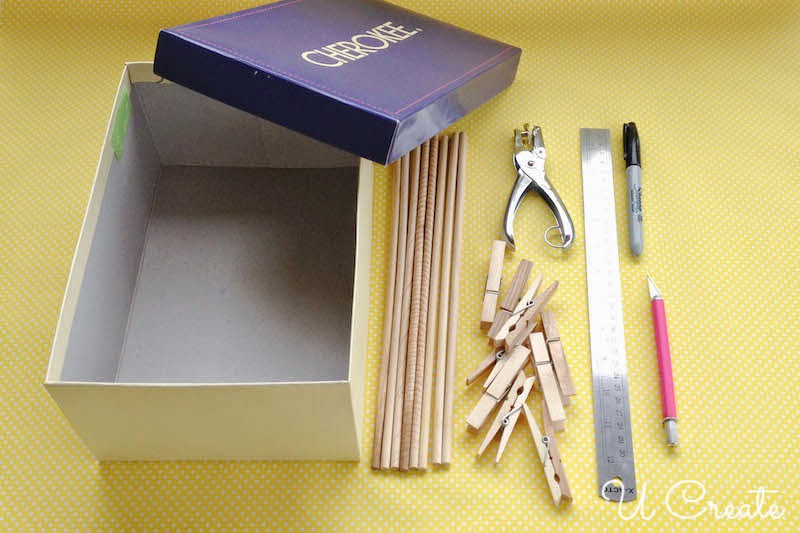 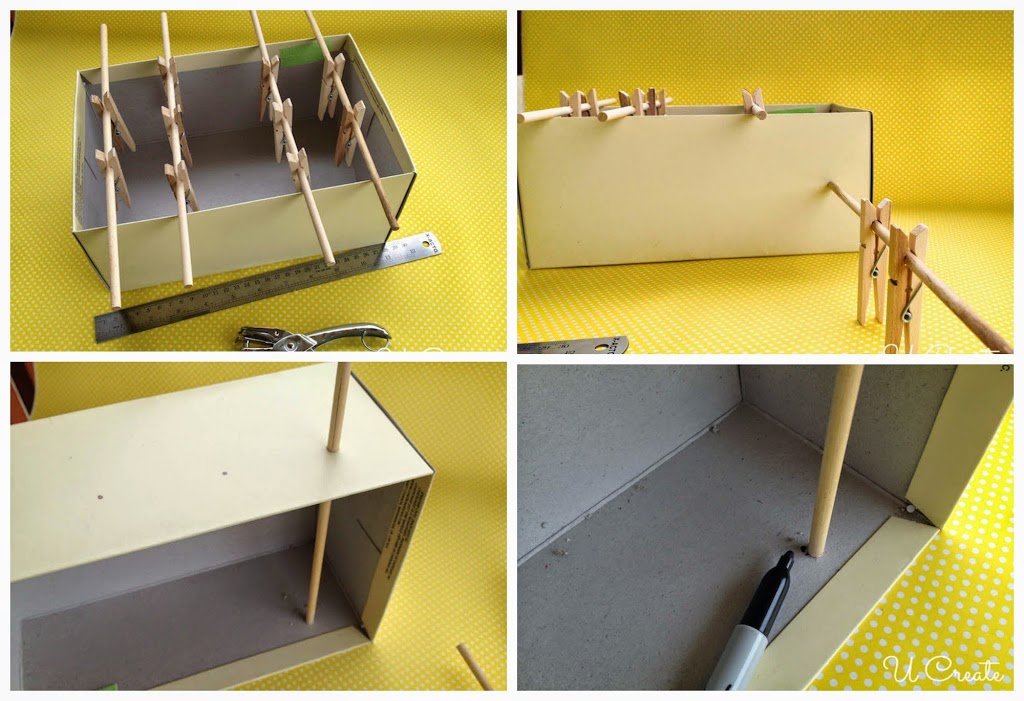 1. Determine how you want the clothespins on the dowels.  I used two “goalies” on each end and three middle guys.  So each child only needs to handle two dowels.
2.  Stand the clothespins up and put the dowel right against the outside of the box (see the picture above.)
3.  About 1/4 above the dowel, put a mark for the hole.  You want the clothespins to be able to move without hitting the bottom of the box.
4.  Make a hole on your mark by pushing the tip of the X-Acto knife in and turning it around.  It makes a perfect hole when you use a sharp blade. Next push the dowel through and mark the inside of the box where you want the hole on the other side. 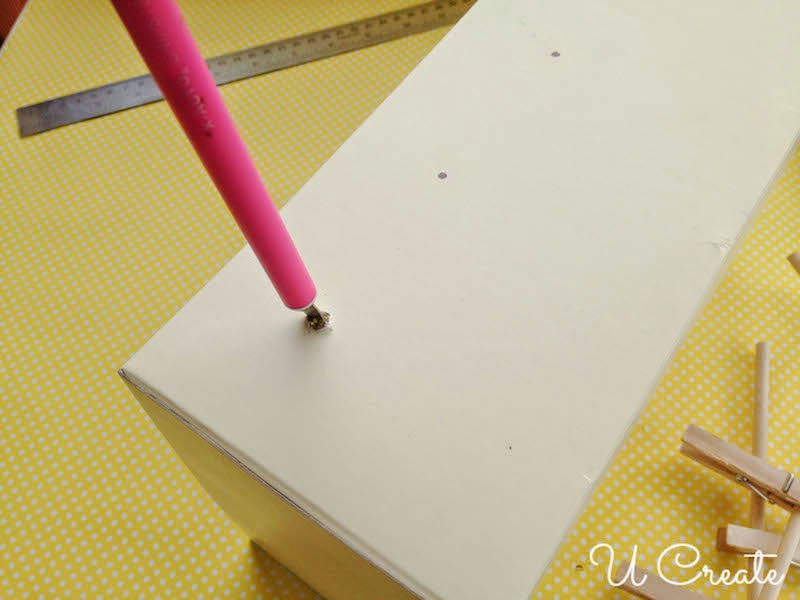 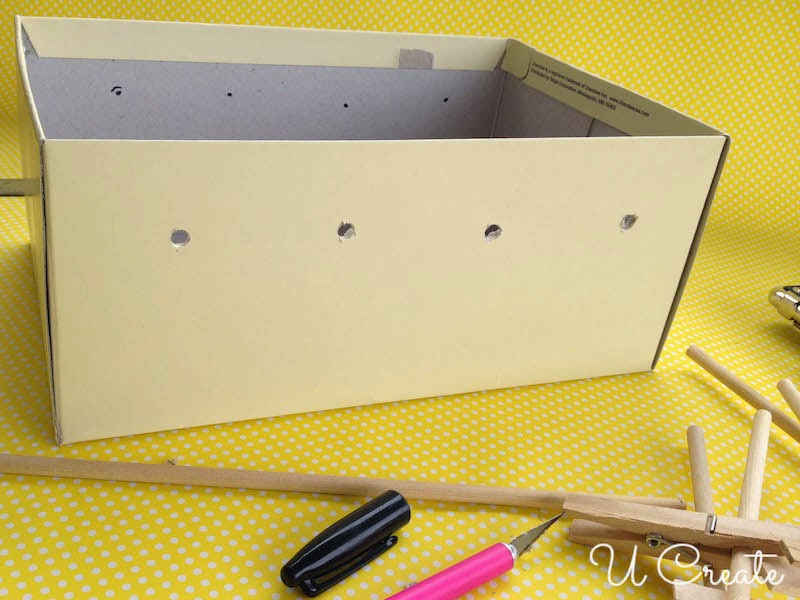 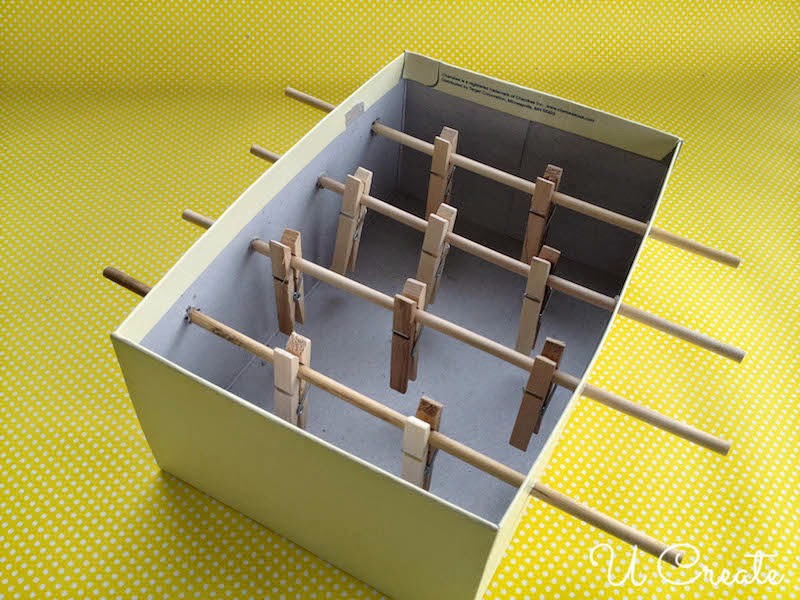 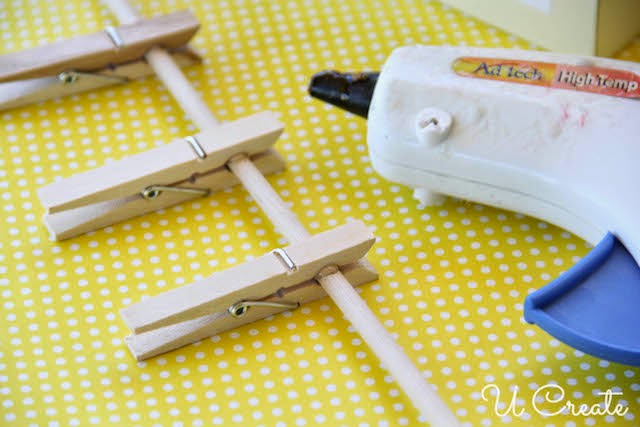 6. Hot glue the clothespins on the dowels. 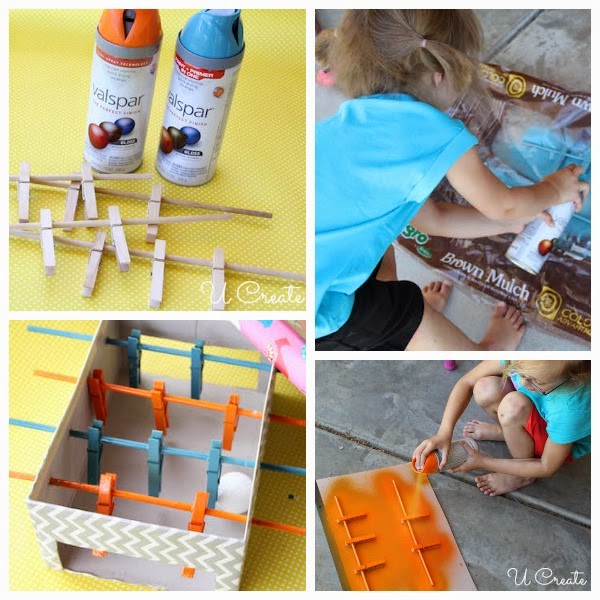 7.  Take your dowels with glued clothespins and paint them.  I let my girls pick the color they wanted and do the actual spray painting.  They thought that was pretty cool. 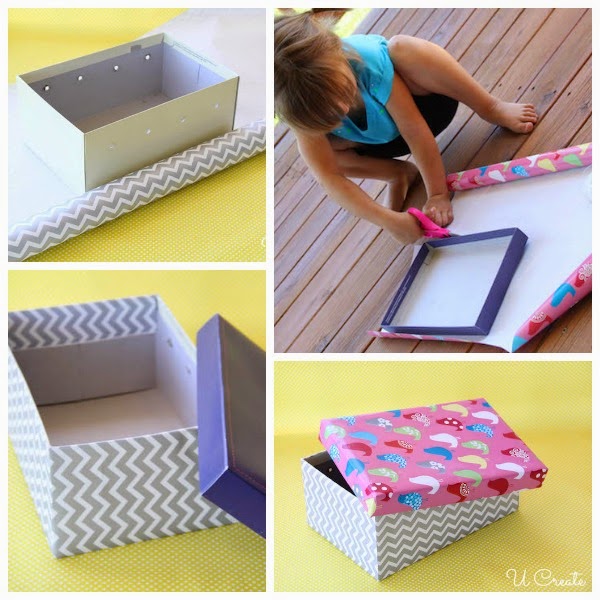 8.  Cover the box with wrapping paper. The girls picked this out too. 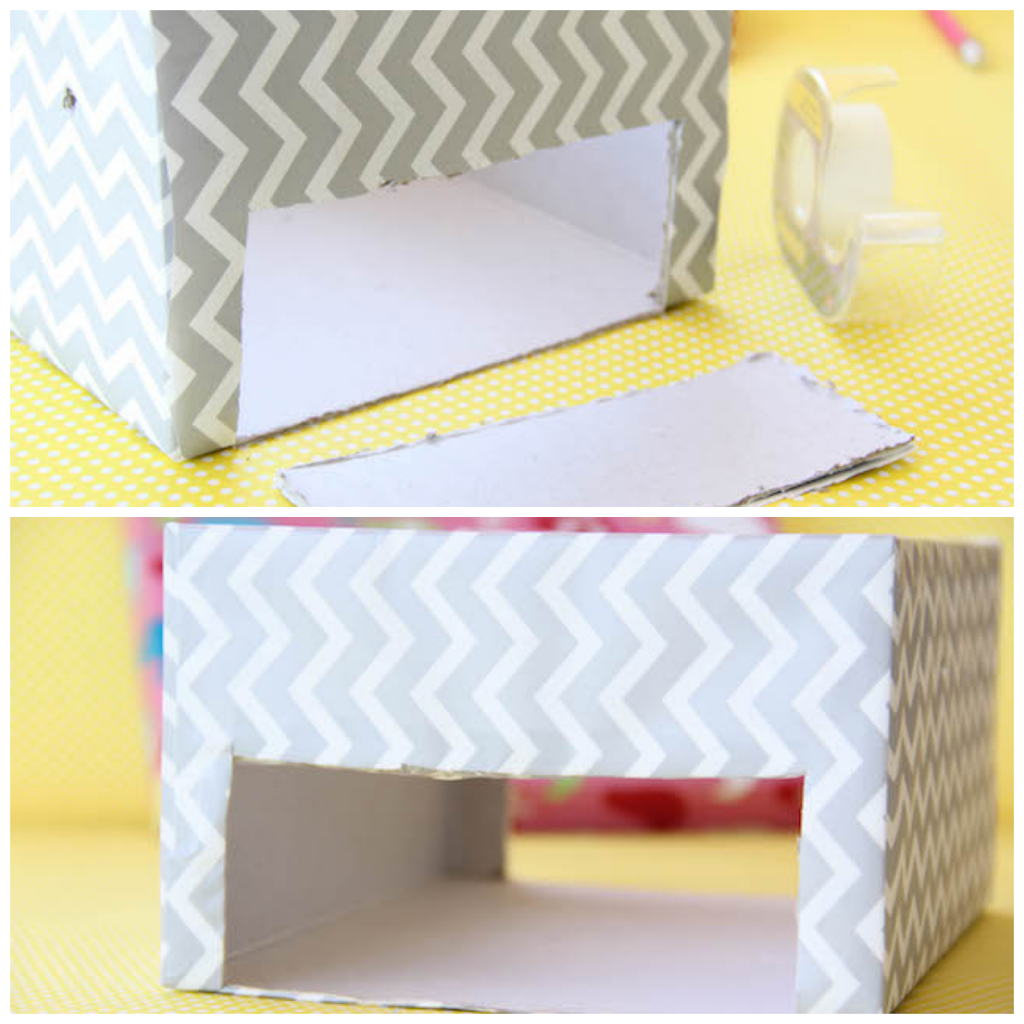 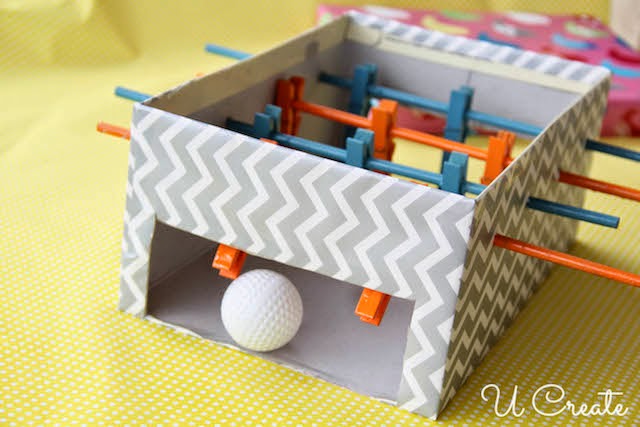 10.  Put the dowels back in and drop in a ping pong ball.

Now you have an adorable kid-sized foosball “table”.  My girls LOVE it.  Not only do they love it because they can play foosball with each other, but because they got to help make it. 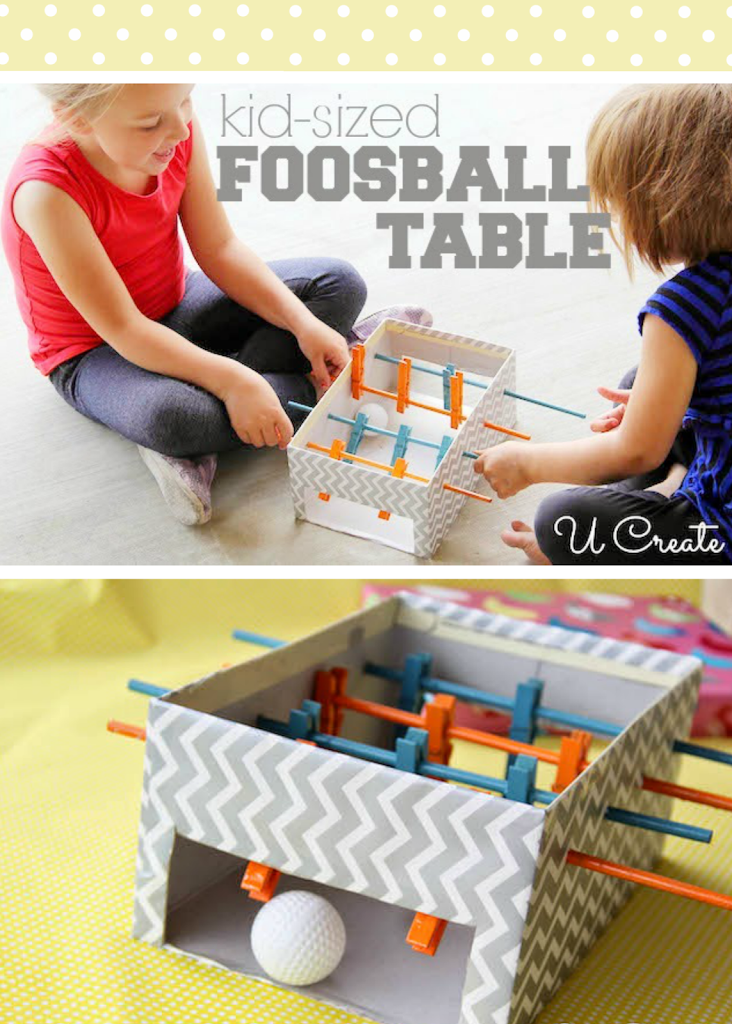